We are pleased to present the Fall/Winter 2022-2023 K-12 Virtual Student Art Gallery, highlighting the amazing artwork of our students.

The exhibit features the ability to virtually walk through a curated gallery of work — and we hope you’ll enjoy immersing yourself in the exhibit as the vision of these talented student artists comes to life.

Dubuque Senior High School returned from the 2022 Iowa Thespian Festival with a number of student award and the induction of a staff member into the Iowa Thespian Hall of Fame.

Aaron Dean, an English teacher and theatre director at Dubuque Senior High School, was inducted to the Iowa Thespian Hall of Fame as recognition for demonstrated dedication to the Thespians of Iowa, promotion of theatre arts and arts education, and years of service to students at their respective schools.

For students, the International Thespian Excellence Awards (or Thespys® for short) recognize the highest level of achievement in school theatre performance, technical theatre, writing, and filmmaking.

This educational program celebrates the work of theatre students, giving them the opportunity to receive constructive feedback on prepared theatrical material, technical design, plays, and short films, and recognizing their achievements on local, regional, and international stages.

The following Dubuque Senior students earned honors at the 2022 Iowa Thespian Festival, based on adjudication from theatre professionals from around the country. They also qualified to move on to the national competition.

First Place in Group Acting
Lucia Kuehn, Scout Kuehn, Soren Obermueller, Aidan Seville, and Emma Ward
“Over the River and Through the Woods”

The Multi-State Information Sharing & Analysis Center® (MS-ISAC®) has named Whitney Hohmann, a Carver Elementary School fifth-grader, as a national winner of the organization’s annual Kids Safe Online Poster Contest. In addition to the national award, the MS-IAC and the State of Iowa Office of the Chief Information Officer (OCIO) named Whitney and her classmate, Joseph Alkhoury, as winners of the contest at the state level. 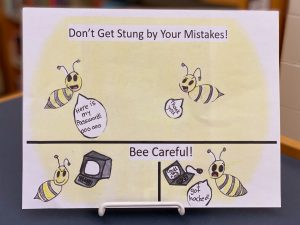 Hohmann’s entry was one of 13 selected as national winners from thousands of entries. MS-ISAC will be creating a Cyber Safety activity book in which Whitney’s artwork will be showcased sometime in October, in honor of National Cybersecurity Awareness Month. This marks the third year in a row that Carver Elementary has had two Carver recipients representing Iowa in the national competition.

Hohmann’s poster encourages students to “Bee Careful!” while online and Alkhoury’s message is to “Take Time Before Your Post!”

All fifth-graders at Carver are given the opportunity to participate in the Kids Safe Online Poster Contest annually through a collaborative art and digital citizenship project. The contest, led at Carver by art teacher Julie Lammer and technology coach Donna Schmitt, centered around how to treat others online; how to handle cyberbullying, unwanted attention and strangers online; keeping private information private; and navigating the internet safely. Students carefully considered which of these topics need reinforcement among their peers and designed creative posters to display their advice. 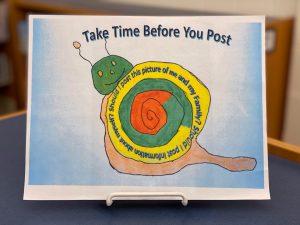 Through the project, Lammer asked students to identify how art can inform or change beliefs, ideas, and/or values. Through this identification process, students came up with a theme of how they could influence peers to think twice about their cyber choices. Schmitt then introduced students to the drawing tools available in PowerPoint and taught students to create backgrounds and/or fonts for their poster submissions.

Students completed their posters in art class using various media including marker, paper, colored pencil, and collage techniques. The posters were a springboard for engaging in dialogue about digital citizenship, and they allowed students to display their artistic talents while showcasing the importance of internet safety.

The MS-ISAC, which hosts the contest, is grant-funded by the U.S. Department of Homeland Security (DHS) Cybersecurity and Infrastructure Security Agency (CISA) and it is the focal point for cyber threat prevention, protection, response, and recovery for the nation’s state, local, tribal, and territorial (SLTT) governments.

We are pleased to present the 2021 Dubuque-Area K-12 Virtual Art Exhibition, a way to highlight student work in a year that makes in unable to do so in person.

The exhibit features the ability to virtually walk through a curated gallery of work — and we hope you’ll enjoy immersing yourself in the exhibit as the vision of these talented student artists comes to life. 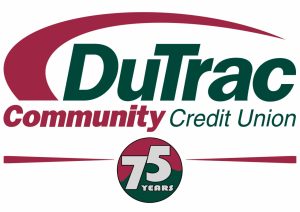 Students to Participate in the First Online Program and to Receive $10,000 Scholarship 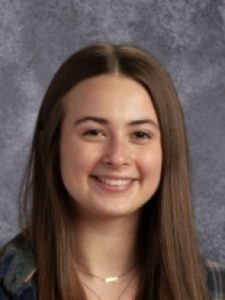 Manternach and Drahos were selected from among the state’s top student leaders to be part of the 104 national student delegation, who will each also receive a $10,000 college scholarship for undergraduate study.

Due to the pandemic, the 2021 program will break ground as the first-ever fully virtual Washington Week, and is designed to be a highly interactive and exciting education and leadership forum for the nation’s most outstanding student leaders.

Manternach, a senior at Dubuque Senior High School, serves as the treasurer of the Student Body, president of the National Honor Society, secretary of Key Club, a delegate for Model UN and a representative to the Iowa Youth Congress. She plays varsity soccer for her school and volunteers extensively in her community and nationally through The Farmlink Project, a national initiative to fight food insecurity through repurposing surplus produce.

The USSYP was created by Senate Resolution 324 in 1962 and has been sponsored by the Senate and fully funded by The Hearst Foundations since inception. Originally proposed by Senators Kuchel, Mansfield, Dirksen and Humphrey, the Senate leadership of the day, the impetus for the program as stated in Senate testimony is “to increase young Americans’ understanding of the interrelationships of the three branches of government, learn the caliber and responsibilities of federally elected and appointed officials, and emphasize the vital importance of democratic decision making not only for America but for people around the world.”

Each year this extremely competitive merit-based program brings the most outstanding high school students – two from each state, the District of Columbia and the Department of Defense Education Activity – to Washington, D.C. for an intensive week-long study of the federal government and the people who lead it. However, this year, the program will be held online.

The overall mission of the program is to help instill within each class of USSYP student delegates more profound knowledge of the American political process and a lifelong commitment to public service. In addition to the program week, The Hearst Foundations provide each student with a $10,000 undergraduate college scholarship with encouragement to continue coursework in government, history and public affairs. All expenses for Washington Week are also provided by The Hearst Foundations; as stipulated in S.Res.324, no government funds are utilized.

Delegates and alternates are selected by the state departments of education nationwide and the District of Columbia and Department of Defense Education Activity, after nomination by teachers and principals. The chief state school officer for each jurisdiction confirms the final selection. This year’s Iowa delegates and alternates were designated by Mrs. Ann Lebo, Director of Education.

During the program week, the student delegates will attend online meetings and briefings with senators, the president, a justice of the Supreme Court, leaders of cabinet agencies and senior members of the national media, among others.

In addition to outstanding leadership abilities and a strong commitment to volunteer work, the student delegates rank academically in the top one percent of their states among high school juniors and seniors. Now more than 5,800 strong, alumni of the program continue to excel and develop impressive qualities that are often directed toward public service.

Three Hempstead High School students have been named among more than 4,500 candidates in the 2021 U.S. Presidential Scholars Program. The candidates were selected from nearly 3.6 million students expected to graduate from U.S. high schools in the year 2021. Graduating seniors Samuel Durdin, Luke Kotz and Brendan Stahl were recognized with the honor.

Inclusion in the U.S. Presidential Scholars Program is one of the highest honors bestowed upon graduating high school seniors. Scholars are selected on the basis of superior academic and artistic achievements, leadership qualities, strong character and involvement in community and school activities.

A distinguished panel of educators will review these submissions and select approximately 600 semifinalists in early April. The Commission on Presidential Scholars, a group of up to 32 eminent citizens appointed by the President, will select the finalists, and the U.S. Department of Education will announce the Scholars in May.

If circumstances permit all Scholars are invited to Washington, DC in June for the National Recognition Program, featuring various events and enrichment activities and culminating in the presentation of the Presidential Scholars Medallion during a White House-sponsored ceremony.

The U.S. Presidential Scholars Program was established in 1964 by Executive Order of the President to recognize some of our nation’s most distinguished graduating seniors for their accomplishments in many areas: academic success, leadership, and service to school and community. It was expanded in 1979 to recognize students demonstrating exceptional scholarship and talent in the visual, creative, and performing arts.

In 2015, the program was expanded once again to recognize students who demonstrate ability and accomplishment in career and technical fields. Annually, up to 161 U.S. Presidential Scholars are chosen from among that year’s senior class, representing excellence in education and the promise of greatness in America’s youth. 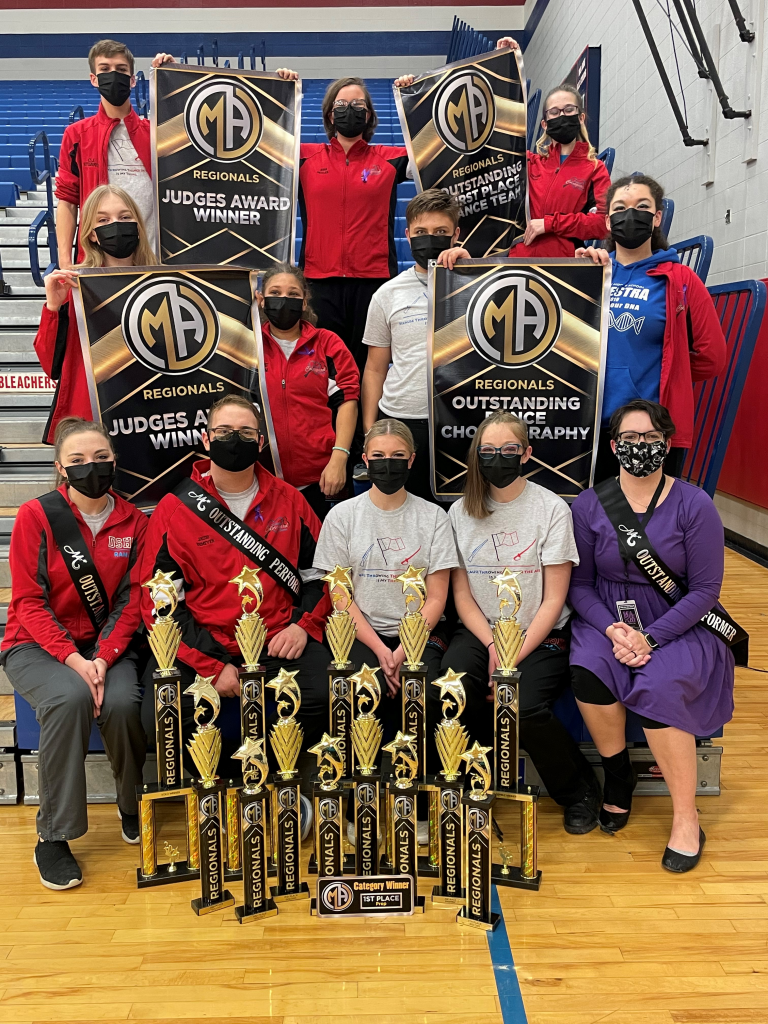 The Dubuque Senior High School Color Guard competed in the Marching Auxiliaries Classic Regional Competition in Sioux City, Iowa, on February 6, and returned with a host of awards and accolades.

Thomas Jefferson Middle School Student Abigail Schmitt is among three students in the state awarded scholarships from the Iowa Agriculture Literacy Foundation (IALF) and funded by the Iowa Pork Producers Association to support student research of pork and swine. 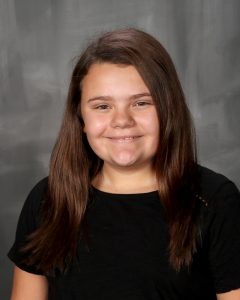 Schmitt was awarded $400 to support her research and present her work at one of the four science fairs and symposiums hosted in Iowa. A sixth-grader at Jefferson, she is researching animal behavior and moving pigs efficiently. Schmitt will research safe and proper ways to move pigs from one facility to another. She will study animal behavior to get an understanding of what triggers pigs to move and the best practices to direct pigs in a safe manner. Through this research she hopes to create a new system to move pigs on the farm.

Two other scholarships were awarded by IALF – one to senior Silvia Poor from Des Moines Public Schools and one to the team of Brody Moeller and Ward Fraise, both seventh-graders at Central Lee Middle School in Donnellson. 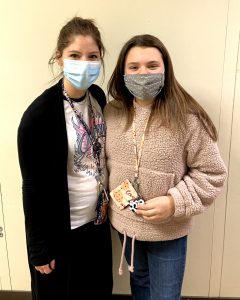 “We are excited to support these students,” said Joyce Hoppes of the Iowa Pork Producers Association. “Good science helps propel responsible pork production forward. As the nation’s top pork-producing state, it’s in every Iowan’s interest to keep pork and pork by-products as an important part of farming and the food supply.”

We love watching a new group of Dubuque Community School District graduates walk across the stage at commencement – and we wish them much success in the future.

Below are the 2019 Dubuque Senior High School and Hempstead High School graduation videos so you can relive the excitement!

These galleries area a way to highlight the remarkable products of art education in the district. It’s a digital attempt at bringing the work of our student artists at all levels into your home – because art is created for others to take in.